Sodium benzoate is an ingredient that kept showing up on my Burt’s Bees product labels and other favorites that I had long considered ‘safe.’ I finally investigated. Sodium Benzoate is a commonly used food preservative as it’s quite good at killing bacteria and repelling fungi. It is produced by the neutralization of benzoic acid with sodium hydroxide and occurs naturally in low levels in foods such as prunes and apples. Sodium Benzoate is also used as a preservative in cosmetics and certain medicines.

There are reported health concerns about the combination of sodium benzoate and ascorbic acid or vitamin C, which frequently happens in sodas and vitamin C facial cleansers, for example. Sodium benzoate and potassium benzoate, when combined with vitamin C, form benzene, a known carcinogen. Despite the many drinks that contain both ingredients, apparently the benzene levels are below those considered dangerous for consumption. [1] That or the Grocery Manufacturers Association lobby got to someone at the FDA. Remember, the Surgeon General used to be a paid spokesperson for cigarette companies …

Also, keep in mind that factors such as light, heat, and expiration date can affect the rate at which benzene is formed.

Though some claim that sodium benzoate isn’t harmful on its own, Professor Peter W. Piper of the University of Sheffield claims that sodium benzoate by itself can damage and inactivate vital parts of DNA in a cell’s mitochondria. This can lead to cell malfunction and programmed cell death.

In other words, Diet Coke is bad, mmmmmmm’k. 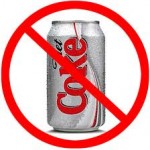